I just realized that I never did get a chance to blog about lil one's Christmas play ... It was very cool .It was really quite the production for a childrens Christmas play.They had three months of practice if that tells you anything.They all did a great job although I was quite partial to one lil angel in particular :) Here are a few pics of the little one ....


Here she is playing cards with her favorite lil angel buddy between acts.We cropped the other little girl out of the picture since we do not know her parents to get permission to post her. 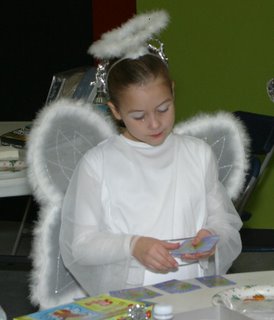 Here is lil one in the group pic ..I so wish I could post the whole pic of all of them .They were so adorable but I will not do that without the parents permission so here is one that I do have permission to post ...she was the only one of them with the praying hands...She made without a doubt the prettiest angel :)

Well I hope you all had a wonderful Christmas and I pray you will have a very blessed New Year !!!! 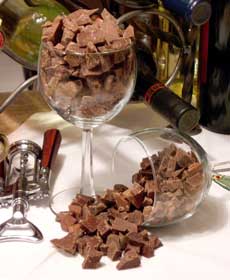 Man, I have learned this week that the power of chocolate is very great. Much greater than I ever imagined..lol I found that at work I can use it to get what I want ..lol from management and fellow associates.So needless to say I will keep chocolate in full supply in my office candy box.It is like a drug to some of these people.Some of them come in my office and get some from the box all day long ..It is a wonder some are even able to fit through the door after a days work ..lol I also have found it is the MEN that are the worse ones. I guess most men are not as worried about thier figure as women are..lol I am starting to have some thoughts that maybe the candy companies inject the stuff with highly addictive narcotics..lol I have even met people that are allergic to the stuff but couldn't put it down ..lol Like breaking out into hives was worth the few seconds of chocolaty bliss.Do I have any extreme chocolate fans as readers?Tell me your thoughts or experiences...I would love to hear them.
at December 29, 2005 4 comments:

A variety of Christian music ....

Well we have been on a search for some Christian rock bands for Guppy the last few days ...
We listen to the local Christian radio station ..it is mainly contemporary ,which I like personally ..I like all types actually, but I could listen to it alot more then him I think ..He is wanting some that is a little harder rock ..We got some good suggestions from some of his readers and have also found some of our own :)

He found some online christian radio stations called : Christianrock.net ,Christianhardrock.net, and Christian-hiphop.net....
The one he is listening to is the hardrock one of course..lol It is actually pretty cool .We have found a few of the harder rock bands now .....
Disciple,Demon Hunter,and Skillet are just a few .....Flyleaf seems to have some good listening potential as well.
Anyone that likes Christian music and likes to listen to tunes while blogging ..I recomend trying one of these ...
I will go enjoy my jars of clay and casting crowns and stuff ..lol I also had a friend give me a cd of a band named Tree 63 which I recomend as well ....
Anyone know of any more good bands that are not really top 40 stuff?
at December 27, 2005 3 comments:

It seems like this Christmas came and went in a flash. I was so busy with everything that I didn't even get to enjoy my new blog skin ..lol I hope you all did :) I hope each and every one of you had a wonderful Christmas.I had an awesome one ..Despite the fact that I miss my family terribly and can not be with them during the holidays ..It was still a great Christmas.My preacher said something that really hit me on Christmas Eve..He said if Christmas is all about the family for you ..then you are almost without fail going to be disappointed.That is so true..If Christ is not your sole focus for the Christmas season then you are setting your self up for hurt or disappointment.If he is ..then you will have a great Christmas regardless of your situation...I think that is a very awesome realization.

Well I hope you are all recovering from the hectic season well....I have decided since I did not get to enjoy my skin hardly at all ...I will keep it up atleast until New Years :) ...I will be visiting you all soon...
at December 26, 2005 3 comments:

The Legend of the Candy Cane

A candymaker in Indiana wanted to make a candy that would be a witness, so he made the Christmas Candy Cane. He incorporated several symbols from the birth, ministry, and death of Jesus Christ.

He began with a stick of pure white, hard candy. White to symbolize the Virgin Birth and the sinless nature of Jesus, and hard to symbolize the Solid Rock, the foundation of the Church, and firmness of the promises of God.

The candymaker made the candy in the form of a "J" to represent the precious name of Jesus, who came to earth as our Savior. It could also represent the staff of the "Good Shepherd" with which He reaches down into the ditches of the world to lift out the fallen lambs who, like all sheep, have gone astray.

Thinking that the candy was somewhat plain, the candymaker stained it with red stripes. He used three small stripes to show the stripes of the scourging Jesus received by which we are healed. The large red stripe was for the blood shed by Christ on the cross so that we could have the promise of eternal life.

Unfortunately, the candy became known as a Candy Cane a meaningless decoration seen at Christmas time. But the meaning is still there for those who "have eyes to see and ears to hear." Every time you see a Candy Cane, remember the Wonder of Jesus and His Great Love that came down at Christmas, and that His Love remains the ultimate and dominant force in the universe today

Well it is Wednesday and Christmas is fast approaching.There seems to be a million and one things to do .Every year I tell myself ..."Next year I will be more prepared"...yeah right..lol That never happens.Always seems like a mad dash at the very end to get a hundred and one things done..lol To top it all off we are on a quest to find a white leotard.The Angel costume for the play is totally see through and they want them in leotards so they can change into the last acts clothes with no problems. No panties showing that way.They can all change together in one big room.That doesn't seem like a huge deal but I am finding out that white leotards are very hard to find.It seems that pink and black are the colors of choice for stores to carry.So that is what we are dealing with right now..lol Anyone got any suggestions? We have tried Wal-mart and Target.I am thinking next I will call Burlington coat factory...Also ...we had a blast in Bethlehem Monday night.It was so great to watch lil one's reaction to everything.To see things through a childs eyes is the coolest thing ...It is what makes life so much fun :)

Here is little one with Patrick the Donkey:

Her helping the goat find a snack:

Here lil one was getting annointed with oil:

Here is lil one going to give her gift that one of the wise men gave her , to baby Jesus:

Well it has been a good weekend .Despite the fact I feel like I have had cotton balls shoved up my nostrils again.I got the pleasure of getting lil ones cold :)Oh joy of joys ..lol Let's see ohhh and despite the fact that yesterday we went to watch lil one practice for her play next week and while leaving I fell flat on my face.Oh that was fun .....not .I was sooooooooooo embarrassed.All I could do it get up cry and run off from everyone as fast as I could.Oh man I felt stupid.I am blaming it on being so sick and my head being swimmy (is that even a word..lol ,it looks funny ) Oh well ..it is now..lmao oh yeah and the slop in the floor that I tripped over.My friend told me atleast you did it at church and not at work where everyone would have laughed at you ..lol Which is very true.Lil one went to the Nutcracker ballet with gramma ( Mighty Mite) and we went to church and then Guppy ,my friend from work that I will call Mrs.Backe ..lol ( she loves Brandon Backe) and I went to a walk through Bethlehem which was sooo awesome.We have never been but have wanted to go for several years now.I would totally recommend it to everyone. We also went to the drive through one after that .That was pretty cool also ,but would have been alot cooler had we not just done the walk through one .The walk through was very interactive which was very cool .We got to pet a camel ,a donkey and some sheep.We are going to take the lil one tommorrow I bet she will have a blast. She just watched the Gospel of John a few weekends ago so to be in that scene will be very cool for her I think.

Well we are half way through the Survivor finale and had to stop to eat some chicken..lol Did anyone else get hungry for chicken after watching that ? Anyway, we made dinner and now we are off to see if it is Steph or Danni that takes home the million.I like them both so I am happy either way.
at December 11, 2005 6 comments:

Thanks to each and every one of you that kept us in your thoughts and prayers.God is definately an Awesome God !!! Test results came back the best they could have for knowing that there was something in both my abdomen and neck for sure. Neither appeared cancerous or alarming. I have never been so happy to hear that I will probably have surgey.I will take that over hearing the other any day .I tell you ..when waiting to hear what the results would be. It sure did put a very different perspective on life for me. Things like this tend to draw you closer to God and family. They definately make you thankful for each and every second you are breathing. Thank you again and God bless... I will post again soon .Thanks to all that have been hanging in there even when I am not able to post regularly :)
at December 08, 2005 9 comments:

It has been awhile since I've blogged. Does anyone still blog anymore? I used to blog daily and look forward to visiting all my blog fri...

Tracy S
Texas, United States
I am a 43 year old wife to my Mr.Wonderful, bonus mom to a beautiful 20 year old daughter. Most importantly though, a sister in Christ! I love to paper craft, read, cook and spend time with my family.