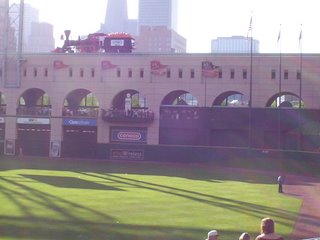 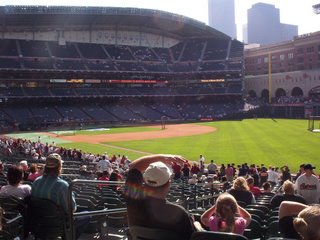 So Saturday Guppy,little one, Astrosprincess, and I went to Minute Maid Park to watch the Astros play the Nationals. Like I said before it was my very first time...( I only recently discovered ( last year towards the end of the season) That I LOVE baseball.I was so excited to go...Man, when we got there and I looked down and could see our team practicing I was like a kid on Christmas... It was this huge rush of excitement .. It was awesome.. It was also very cool being around that many fans rooting for the same team!!! Although we got so lucky as to have four people sitting right behind us that were National fans..grrrrr They were talking smack about everyone of our players especially Craig Biggio....Man, I wanted to turn around and smack every one of them. Biggio is an awesome player and yes he is the oldest one on the team , but he is STILL kickin butt...I do know that unless I had different seats I could not watch the games at the park all season... On the tv you get close ups ..you can see them in the dugout...who is warming up in the bullpen...you can see thier faces( which is a huge plus for our team ;), man we have some hotties on the Astros) We had alot of people walking back and forth up the isles and stopping right in front of us .I did not get to see Berkman hit his homer that game :( I did hear it and stand up and get to see him run the bases home though :).. Anyway ..It was an awesome time and I am so glad that I went...
I am in a hurry so I am not going to proof read this post..So please excuse any spelling errors...I am about to go to the airport to pick up my mom and mema!!! I am so excited... Tomorrow is the big day ...MY SURGERY!! I am so ready to get this behind us...Thanks to you for all your prayers, again!!! I will see you guys when I get back home...* Hugs *

We were loosing so badly that day they had to get volunteers to be pinch hitters... Lil one tried it and knocked one outta the park for the Stros..lol 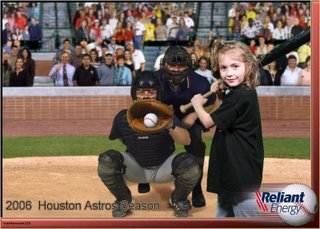 It has been awhile since I've blogged. Does anyone still blog anymore? I used to blog daily and look forward to visiting all my blog fri...

Tracy S
Texas, United States
I am a 43 year old wife to my Mr.Wonderful, bonus mom to a beautiful 20 year old daughter. Most importantly though, a sister in Christ! I love to paper craft, read, cook and spend time with my family.